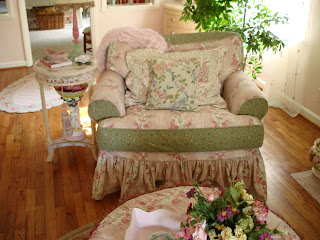 This sweet chair is in the living room of my home away from home that belongs to Sheryl at http://friendshipcottage.blogspot.com/ . She is venturing into the blog world and if you get a minute you might want to skip over there and leave her a word of encouragement.

Her Friendship Cottage truely lives up to it's name. It is home away from home to many. She is always ready with a soft bed, kind words and a keen wit to accomodate her out of town friends. Over the last five years or so she has transformed FC from a quaint home that was loved by its former owners into a cottage that would be ready to grace the pages of any decorating magazine around. It is a combination of Shabby Chic and Sweedish Country style delights that literally draws people in off the street to tell her how much pleasure just seeing the outside of FC gives them. More times than not she will invite them in for a quick tour. It does not matter if she is in the middle of one of her never ending projects or not, she always has time to bless who ever the good Lord sends her way.

So, stop by for a visit and look forward to seeing and reading more from Sheryl, her charming life in FC, the antics of Stella & Gurry her cutie kitties, and Emma her nannadaughter. As an aside, I know she will want me to add that, no she is not a Cat lady ;)

Email ThisBlogThis!Share to TwitterShare to FacebookShare to Pinterest
Labels: Friends, Pink and Green 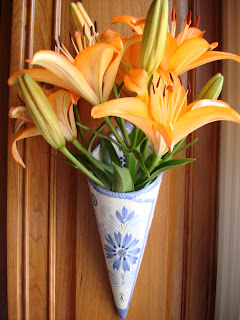 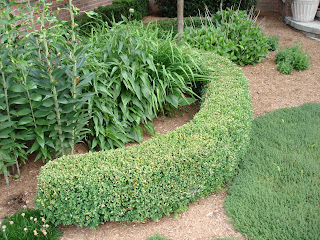 While I was outside in my PJ's this morning taking pictures of the Jumbo's I snapped a couple of shots of my favorite monogram's. There are two big "S"'s on either side of our front porch. We really should have a "J" some where. The "S" is hard to see in the second image. In the spring they are more evident.

OK, so I just deleted the other picture while backspacing, it wasn't really that good any way ;)
Posted by Sue at 7:57 AM 5 comments:

Email ThisBlogThis!Share to TwitterShare to FacebookShare to Pinterest
Labels: Garden 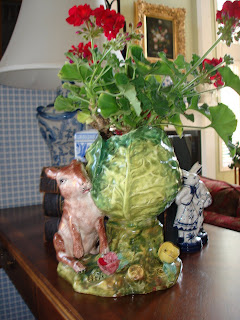 These geraniums probably will not last long since I had to whittle down the root ball to fit them in this bunny cachepot and there is no drainage in it. They just looked so cute in here that I couldn't resist. If they look like they are not going to survive they will have to be transferred someplace else but for now they will do.
Thanks everyone for stopping by and commenting. I hope that you are all OK with me putting links to your blogs in my new favorites sections. It really makes it easier to browse through all your beautiful blogs. Please leave a comment if you stop by. I really shouldn't ask that because I know how hard it is when there are so many lovely sites to visit and so little time. So, even if you don't leave a comment, I understand, and hope that my little blog adds a bit of pretty to your day as yours do to mine.
Posted by Sue at 8:51 AM 4 comments: 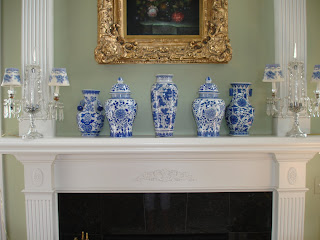 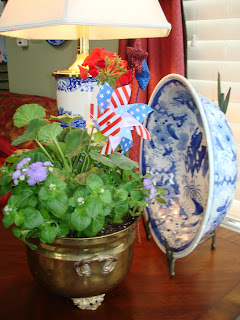 This morning I pulled out some blue and white from all over the house. It is surprising the things that I take for granted until the urge to rearrange hits. These little rose needlepoint chandelier shades on the fireplace lights used to be on my kitchen chandelier at our old house. During the move three years ago one was lost, leaving me with only five instead of the six needed for our chandelier so I had two on a couple of candles in the dining room and three in the basement. After deciding to put them on the fixtures in the great room I headed to the basement to retrieve the shades and only found three and, of course, forgot where the other two were. After a search of the house I found them on the shelf in the dining room on two candles, so I put away one candle, snagged the shade, and there you go, four shades for these lights.

The urns and vases on the fireplace came from the dining room and above the cupboards in the kitchen. With some rearranging, you can't even tell they are missing from their previous positions.

Over the weekend the fourth of July plant was in its red wrapper from the florist. It seemed to stick out like a sore thumb in here so I transplanted it into this brass cachepot that I also had in the basement and it blends in much better now.
Posted by Sue at 10:07 AM 8 comments: 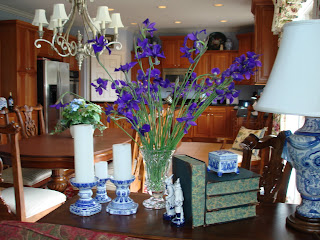 Saturday we had a flash rain storm blow through here in southeast Michigan. I hope my southern friends got some of this rain, they need it much more than we did. Anyway, the rain made a mess of the garden. I went out this morning and cut these iris that were bent over on the ground and cleaned them up as best I could. When I came inside I plunked them into this pretty vase, planning to arrange them later, but decided that they were kind of pretty just the way they are. Not perfect, but what is? They really brighten up this corner of the kitchen. Thanks for stopping by and leave a comment if you will. I enjoy hearing from you and it reminds me to visit your blog. One of these day's I'll put links in my sidebar.
Posted by Sue at 2:08 PM 6 comments: 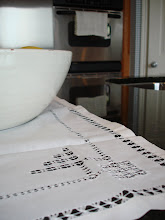